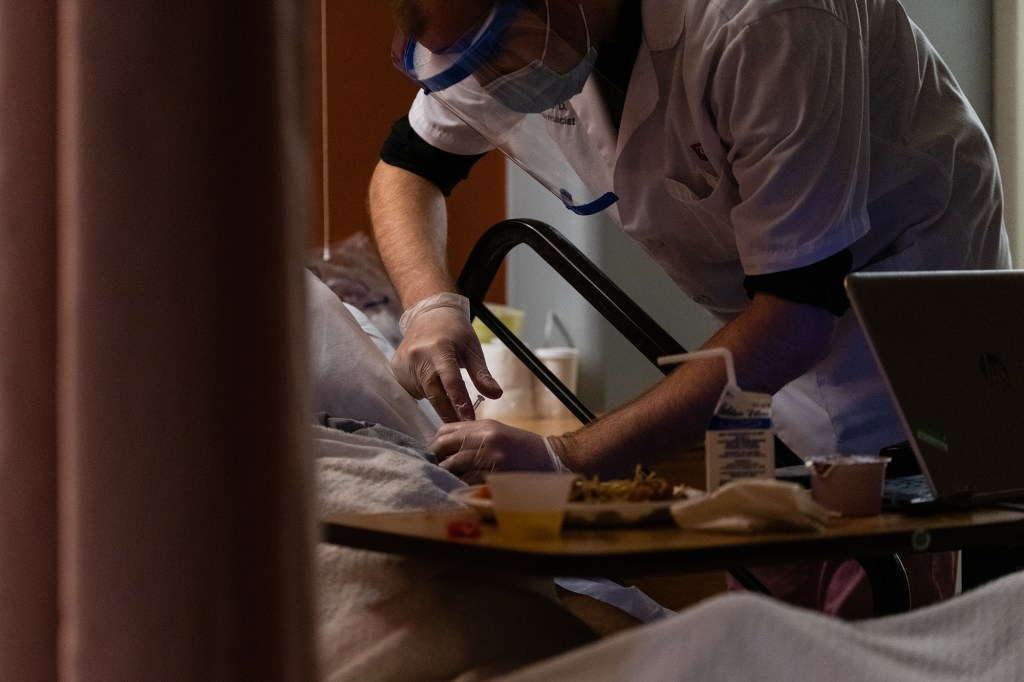 ALBANY – Nearly one in five nursing home staff still refuse to be vaccinated against COVID-19 despite the state’s mandate to get a first injection by September 27 in institutions that house frail elderly residents most vulnerable to the fatal disease.

Despite the tenure, 18% still refuse to be vaccinated, according to the state’s health department, as unwavering resistance from employees persists even with the threat of potential disciplinary action, including dismissal by employers.

The order issued by the state’s health department on August 16 requires all long-term care and hospital workers to be vaccinated and also allows employers to fire those who refuse the order.

As of Monday, just 82% of all senior care workers in the Empire State’s 613 homes had received one or two injections – worrying nursing home operators that if they couldn’t fill the gap. gap and achieve immunization levels of 100%, some homes will. see labor shortages.

Brooklyn has the lowest staff immunization rate among the five boroughs, at 77%, but some New York City homes have numbers well below that, according to the DOH.

However, the mandate appears to have prompted some workers to get vaccinated, as the vaccination rate has improved since the rule was announced in mid-August.

Staff immunization levels jumped 5% statewide between August 15 and September 5, from 70.1% to 75.5% combined at partial and full rate, according to DOH data.

This number increased another 5% between September 5 and 15, reaching 80% in total.

“[The DOH] set an unrealistic goal, given the distance they had to travel and the reluctance of these people to be shot. Based on these figures, it appears that the pace of vaccinations has accelerated significantly over the past two weeks. That still leaves 18% of the nursing home workforce to receive their first injections in just a week, â€Bill Hammond, Empire Center for Public Policy principal investigator, told The Post. health.

â€œThis is a group that has been very hesitant so far, and changing their minds could be a challenge. Unless the state relaxes its mandate – or the courts suspend it – nursing home operators are right to worry about the danger of staff shortages. “

Nursing home staff were among the first to receive the lifesaving shot last December – as more than 15,000 residents have died since March 2020 from the coronavirus – but facility administrators and 1,199 SEIU, the union representing the majority of workers, had problems convincing hesitant individuals.

In many facilities, the vaccination rate of residents has been much higher than that of the workers caring for them.

Steve Hanse, president and CEO of the New York State Association of Healthcare Facilities, which represents nursing homes and other long-term care facilities, said the ultimate goal was to d ‘reach 100%, but that the DOH should be more flexible, as is the state policy governing school employees.

“If we don’t have a 100% immunization rate and, as a result, employees are forced to quit their jobs amid a long-term care workforce crisis, the plan B should be to allow, at least temporarily, a regular COVID-19 testing option for healthcare workers, similar to what the state has allowed for teachers, â€he said.

Jim Clyne, who runs LeadingAge NY, which represents nonprofit seniors’ residences, noted that some homes have immunization numbers well below the state average and also favor the testing option.

“It allows some of the reluctant people to get vaccinated more time and it would give the facilities more time to perhaps recruit and have access to staff who are willing to get vaccinated.” The reality is that if you have a building full of people in need of care, you have to find a way to provide [that] take care of them, â€he added.

Currently, 89 percent of state residents have started or completed their immunization series.

â€œAs we have said before, the Department is aware of the potential staffing issues. However, our overriding goal is the protection of patients and residents in our healthcare facilities, â€said Jeffery Hammond, DOH spokesperson.

â€œThat’s why everyone who is medically fit should be vaccinated, especially healthcare workers who interact with and care for our most vulnerable New Yorkers at risk. The Department will listen to all contributions that help advance the goal of protecting patients, visitors, the public and healthcare workers. ”