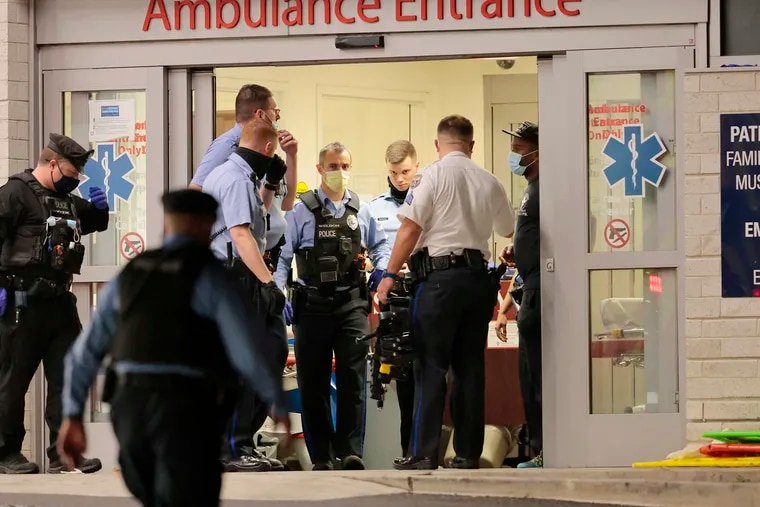 A murder at Jefferson University Hospital on Monday morning was a devastating reminder that for many healthcare professionals, workplace violence is too often a part of their lives.

“It is a tragedy that violence has taken place in the workplace as we fight to keep it safe,” said Chris Woods, president of the National Union of Hospital and Health Care Employees, Local 1199c.

The shooter and the victim were both Jefferson staff and longtime union members, he said.

Health care providers are among those most likely to be victims of workplace violence, according to data collected by the Occupational Safety and Health Administration. From 2002 to 2013, OSHA reported that workplace violence requiring the injured person to take time off to recover was four times more likely in health care settings than the average for other private industries.

â€œA hospital is supposed to be a safe place,â€ said Maureen May, a nurse at Temple University Hospital and president of the Pennsylvania Association of Staff Nurses and Allied Professionals. â€œMeasures are in place to address them, but these measures are simply not sufficient at this stage. “

But, as in Jefferson’s case on Monday where a certified nursing assistant is accused of shooting a coworker in the hospital, only 3% of injuries to healthcare workers in the workplace are the result of violence between coworkers, a OSHA reported.

“It’s certainly a new level of concern for many of us, knowing that someone can come in with a weapon like this, or multiple weapons, and can do it to one of our own employees.” said Shae Spicer, a nurse from Jefferson. .

OSHA found that violence against workers by patients was much more common. These account for 80% of all cases and are considered common in some hospitals. A 2017 survey found that 88% of staff at Level 1 trauma centers had experienced or witnessed workplace violence within a six-month period. A 2019 article on Jefferson’s own website noted that 60% of workplace assaults occur in healthcare facilities, although those staff represent only 13% of the nation’s workforce.

At Temple, May said, staff know a colleague has been involved in a physical altercation when they hear a “Code Gray” being announced.

â€œThere are times when we hear it four, five or six times a day,â€ she said.

Among the most high-profile incidents of violence against healthcare workers in the region, a patient killed a social worker and injured a psychiatrist at Mercy Fitzgerald Hospital in Delaware County in 2014. The psychiatrist had a gun and retaliated, injuring the patient.

In 2017, a nurse at Lehigh Valley Hospital-Muhlenberg required surgery after being stabbed in the neck by a man the nurse treated earlier in the month.

Jefferson’s security measures include metal detectors in the emergency department, security turnstiles in all of its main buildings that require visitors to check in, and its own armed police force formed about six years ago.

â€œThere are so many incidents involving firearms happening in the world today; Jefferson vice president of public safety Joseph Byham said in this 2019 post, “we knew we had to be able to react quickly if something went wrong.”

The hospital also gives some staff members Bluetooth-equipped badges which, when pressed, send a signal to security and the nurse in charge of the unit to alert security personnel that a member of the staff need help. Jefferson did not say whether this system was used during the shooting.

The causes of violence can include psychiatric disorders, people under the influence of drugs and alcohol, or strong emotions that can overwhelm people in intensive care units. Families facing bad news about a loved one can go wild, experts said. Emergency, geriatric and behavioral health departments were particularly at risk, OSHA reported.

Kendra Barkasi, president of Nurses and Techs United at Eagleville Hospital in Montgomery County, which cares for psychiatric patients and drug addicts, said last year that a patient hit her in the face with a container used to hold needles.

â€œThe rest of the night she threatened to hurt me,â€ she said.

She has also been the victim of vulgarity and threats of rape from patients, she said.

Reports of such encounters probably do not represent the full extent of the problem, experts said. Incidents that do not result in injury often go unrecorded, the American Academy of Emergency Medicine Resident and Student Association (AAEM / RSA) reported last year. Hospitals or healthcare providers that do not have clear policies for reporting workplace violence can give workers the impression that there is no point in documenting a violent encounter.

â€œLeaders have always meant that healthcare should always be an open and inviting atmosphere,â€ he said.

But metal detectors would only stop a fraction of workplace violence in healthcare facilities, AAEM / RSA reported, because most assaults do not involve the use of a gun.

The COVID-19 pandemic, which sends waves of patients to overwhelmed hospitals that can only allow limited visits from family members, has only increased tension in many facilities.