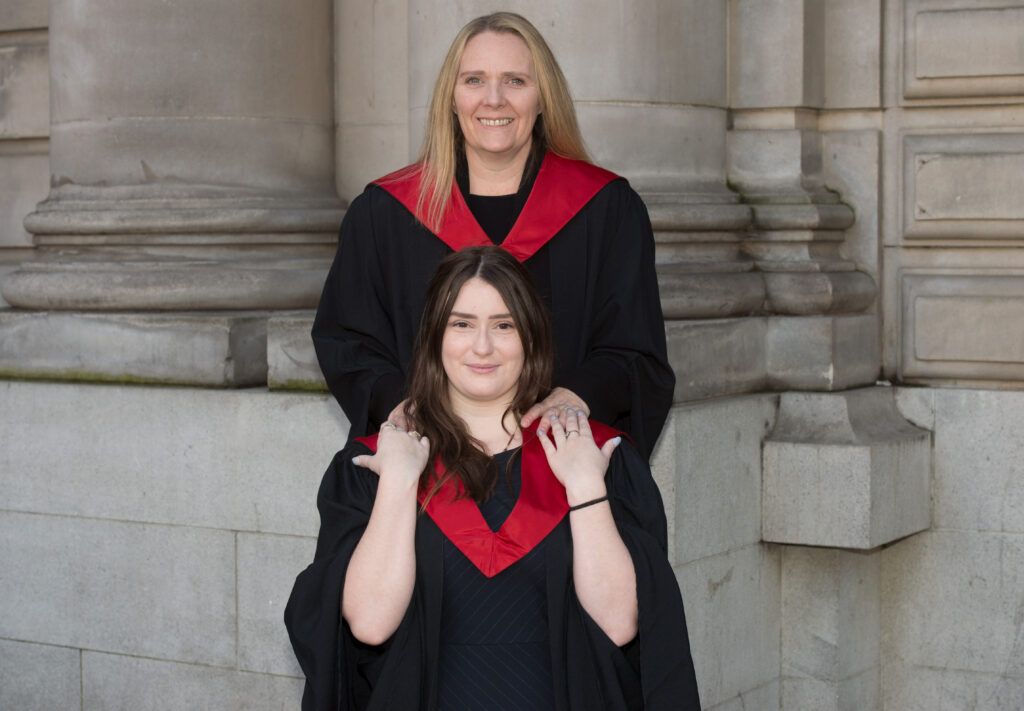 A mother and daughter marked a milestone today as they completed the same university nursing course together.

Kirstie Tidy, 45, of Livingston, had worked in the insurance industry but always wanted to work in the care industry.

Although she has not had any formal education since leaving school, she successfully applied for a place at the university while taking an access course at Edinburgh College.

Her daughter Kayleigh, 22, also from Livingston, decided to take up adult nursing after being extremely impressed with the care her grandmother received after being diagnosed with cancer.

The mother and daughter began their Bachelor of Science in Nursing in September 2015.

Kirstie said: â€œWe spent time together in class during the labs and were often mistaken for each other because we had the same initials – which sometimes resulted in one of our names being removed because it looked like a duplicate. Lots of staff didn’t know we were related.

â€œWe studied separately and chose different topics to write about, but it must have been quite difficult for my husband Steven and my son Logan, 16, to have two stressed-out students at home studying for the exams at the same time. ” she said.

â€œMyself and Kayleigh are now trying to get placements to launch our careers,â€ she said. “This is the ambition of my life because I have always wanted to help others and now, here I am in my forties, I am finally taking the plunge.”

He added, â€œWe both look forward to pursuing careers in nursing. “

Kayleigh said she and her mother traveled to the university’s Sighthill campus together from West Lothian, but made friends of their own on campus.

â€œMy friends were shocked that my mom was going the same way and people were curious how we fared,â€ she said. â€œLike a typical mother and daughter, we get along well.

â€œWe were both stressed by exam time, but it was good to share the stress with someone who knows exactly what the issues are and what you are going through,â€ she noted.

â€œFrom the start, I was aware of the strong bond between mother and daughter in their mutual support to achieve their individual and common goals,â€ she said.

She added: â€œThey have a shared determination to make a difference in the lives of those they care for.

â€œThey both have a fantastic future ahead of them and I am proud to have played a small part in their nursing journey,â€ she said. ” Good job girls ! “

Today’s ceremony at Usher Hall was truly a family affair, as sisters Kerri Russell and Colene Flannigan are also graduates of the university’s nursing programs.