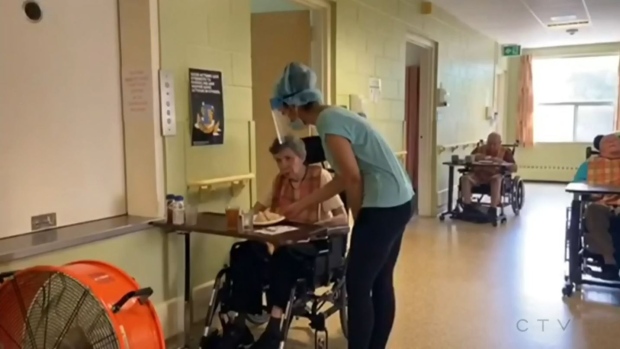 The union is asking the Prime Minister to immediately increase their wages by $ 4 an hour. Sharon Teare, president of the New Brunswick Council of Nursing Home Unions, which represents 51 of the province’s 70 nursing homes, says several places in the province are operating with 50 percent of their staff or less, which does not not allow them to prioritize those entrusted to them.

â€œNow we’re at a point where retention and recruiting is crippling the industry and it can’t function anymore,â€ Teare said.

She said many staff members work double or triple shifts, while some show up for work injured.

According to Teare, the current average salary of a CUPE member working in a seniors’ residence in the province is $ 21.50.

At Monday’s press conference, workers explained how these issues not only affect them, but also the vulnerable people in their care.

” What’s going on? These residents who die alone and who are in palliative care because they do not have the hands to ensure that the palliative measures are applied. And this is not good. Residents do not eat breakfast due to lack of staff. “

The Department of Social Development responded to CTV’s request for a comment from the Premier by saying it takes the concerns raised by the NB Council of Nursing Home Unions very seriously and that the Department is working with its partners, including “the Department of Health and the Department of Post-Secondary Education, Training and Labor, to examine potential solutions.”

“This is one of the reasons the government has increased its annual budget by $ 15 million to increase hours of care to 3.3 hours by April 2022.”

In its statement, the ministry also said: â€œIn accordance with the six-year bargaining agreement, officially adopted in May 2019, a 5.5% salary increase was agreed over a four-year period – most retroactively. – for employees “.

But Teare believes the change must happen soon. Due to an extreme staff shortage, residents do not eat breakfast and cannot always wash themselves once a week, she said.

“Residents have the right to take a bath at least once a week, not every two weeks.”

Without a change or increase in wages, workers say they are afraid of the future.

â€œThe cost of doing nothing is much higher than the cost of fixing the problem,â€ Oulette said.