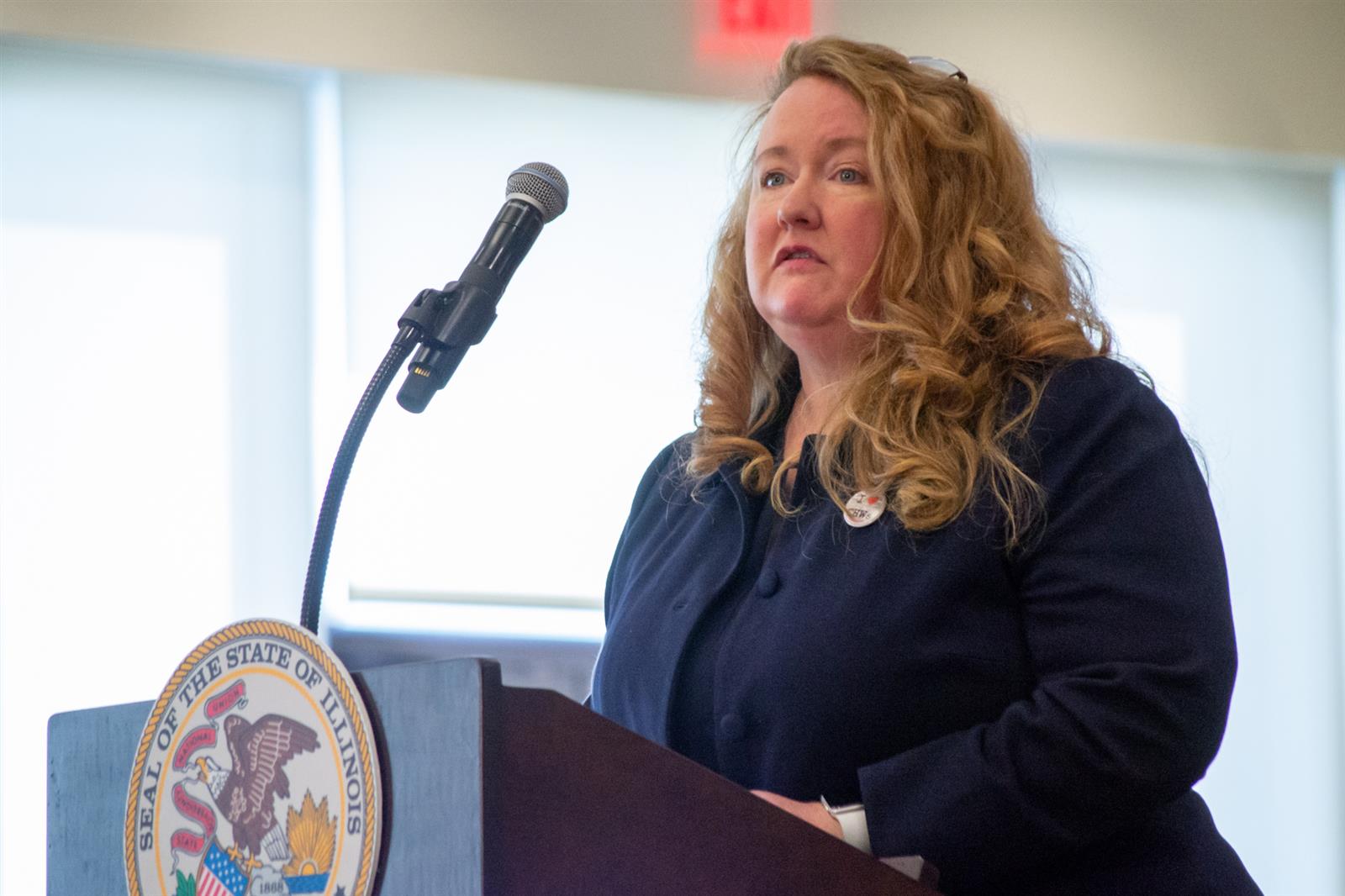 Theresa Eagleson, director of the Illinois Department of Health and Family Services, speaks at an event in Springfield last year. The DHFS is proposing an overhaul of how nursing homes are funded in the state. (Capitol News Illinois photo by Jerry Nowicki)

Competing bills aim to improve staffing and quality of care

SPRINGFIELD — A political battle is brewing between Gov. JB Pritzker’s administration and a segment of the retirement home industry over a key part of the governor’s budget proposal, expanding the health care workforce of the condition, especially in long-term care facilities.

On Wednesday, Pritzker outlined a $45.4 billion budget plan for the fiscal year that begins July 1, which included several elements aimed at recruiting and retaining nurses and other healthcare workers, such as a increased funding for university scholarships and an increase in salaries.

But one of the biggest initiatives is a $500 million plan to overhaul how Medicaid pays for nursing home care to improve staffing levels and the quality of care residents receive.

The funding would come from an enhanced assessment of nursing facilities that would be used to leverage additional federal matching funds. The money would then be redistributed to these establishments in a way to reward those who increase their numbers to the recommended levels.

It’s called the “Patient-Oriented Payment Model,” or PDPM, and it was first developed in 2018 within Medicare, the federal healthcare program for seniors.

Now, the Illinois Department of Health and Family Services wants to adopt a similar model for the state’s Medicaid program, the joint state-federal program that provides health coverage to low-income individuals and families.

“For us, it’s all about access and quality of care for Medicaid recipients. That’s what it’s all about,” HFS Director Theresa Eagleson said in a recent interview.

Illinois stands out among all states for having the most understaffed nursing homes in the nation, according to the US Center for Medicare and Medicaid Services. This is measured by the federal government’s Personnel Time and Resource Intensity Verification System, or STRIVE. In 2021, 47 of the nation’s 100 least-staffed nursing facilities were located in Illinois.

The proposed new payment model would replace the current model known as the Resource Utilization Group System, or RUG. Under this system, facilities are reimbursed based on the level of care a resident requires. Medicaid pays more for residents who need higher levels of care, such as therapeutic services, than for those who don’t.

The problem, HFS officials say, is that nursing homes have found ways to categorize their residents as higher-need residents in order to get higher reimbursements without actually providing those higher levels of service, a a practice known as “overcoding”.

“Over time, facilities figure out how to maximize coding in these pricing methodology systems so they can get the most money for the residents they serve,” said Kelly Cunningham, Medicaid administrator for the facility. ‘State. “And so, in part, the feds moved to RUG’s PDPM because they recognized that this overcoding was happening, particularly on the side of medicare in therapy, which was very expensive, very lucrative for the facilities to code residents as requiring rehabilitation.

For the past two years, HFS has been negotiating with the nursing home industry and legislators on a new payment system and reached a conceptual agreement last fall. But they were unable to get it through the General Assembly in the fall veto session.

He would ask HFS to develop a system of reimbursement through administrative rules in which residents of nursing homes would no longer be coded according to their level of acuity. Instead, facilities would receive a base rate of $85 to $90 per day for each patient, plus graduated “top-ups” as their staffing levels approach their STRIVE goals.

Even combined with the higher ratings, most care homes would be winners under this plan. But the Health Care Council of Illinois, an association whose members are mostly for-profit nursing homes, says about 130 facilities would lose revenue under the plan, including 50 that would be at risk of having to close.

“And if that were the case, do we really want, as a state, to close 50 nursing homes, close the facility, move about 5,000 residents, maybe more, without any plan for where these residents would go,” HCCI Executive director Matt Pickering said in an interview.

It also calls for establishing a patient-centric payment model, but it would offer daily supplements even to facilities below 70% of the STRIVE target. It also calls for an “access to Medicaid” surcharge of $6 per additional day for large facilities where Medicaid residents make up 70% or more of their caseload.

Additionally, in developing this plan, HFS should report to a new Nursing Home Oversight Committee comprised of 12 members appointed by legislative leaders, with one member recommended by nursing home trade associations.

This committee should approve any changes to the payment system. The bill also provides for a two-year “exemption” period during which no EHPAD could see its reimbursements reduced.

Pickering said in an interview that HCCI members serve 60% of all Illinois Medicaid patients in long-term care, and in order for them to agree to pay a higher assessment rate, they insist on a higher extensive legislative oversight.

“We can’t agree to all of this unless it’s transparent, there’s accountability for everyone involved,” he said. “That’s what we can agree on. And you know, so far I have to say that I think the General Assembly, from the first indications, agrees with our position which should remain in the statute.

“I called this bill a distraction, and I think rightly so,” Eagleson said of the HCCI proposal. “On the one hand they say it’s critical, we’re at a critical stage, we need more money to pay staff, we need all those things. And on the other hand, they only delay.

HFS recently published an analysis of HCCI’s claim that 50 nursing homes would be pushed to the brink of closure under the agency’s plan and found that they were all for-profit facilities. with low staff and high percentages of Medicaid residents.

But comparing them to other for-profit facilities of a similar size, the analysis found that these 50 are currently “significantly more profitable” than other similar facilities and have significantly lower headcounts than their peers. peers.

“What we found was that the 50s were differentiated exactly by the goals of our reform, not by the Medicaid tax bracket that we’re offering, and really not by the use of Medicaid, because there’s a lot of higher Medicaid homes in the state that aren’t doing this,” said Andy Allison, director of HFS, who led the review.

Allison also said that HCCI’s prediction of the negative impacts of the reform was based on the assumption that these facilities would continue to operate as they are with low levels of staff and would not adapt to the new payment structure.

“We don’t think they will do anything. We think they’ll adapt like they always have,” Eagleson said. “They will either hire more staff or code appropriately or both, and thus have more revenue.”

Pickering said he couldn’t comment on the HFS analysis because he hadn’t seen the underlying data. But he said he believed a compromise would be reached during this session.

“We all know that this session is supposed to end on April 8,” he said. “I hope that compromise will come sooner rather than later. It’s hard for me to say, I don’t think anyone can say when that compromise might happen. But I think it will be sooner rather than later because really, the administration and all the nursing homes, not just HCCI, we are all under tremendous pressure to get this done.

Capitol News Illinois is a nonprofit, nonpartisan news service covering state government and distributed to more than 400 newspapers statewide. It is funded primarily by the Illinois Press Foundation and the Robert R. McCormick Foundation.