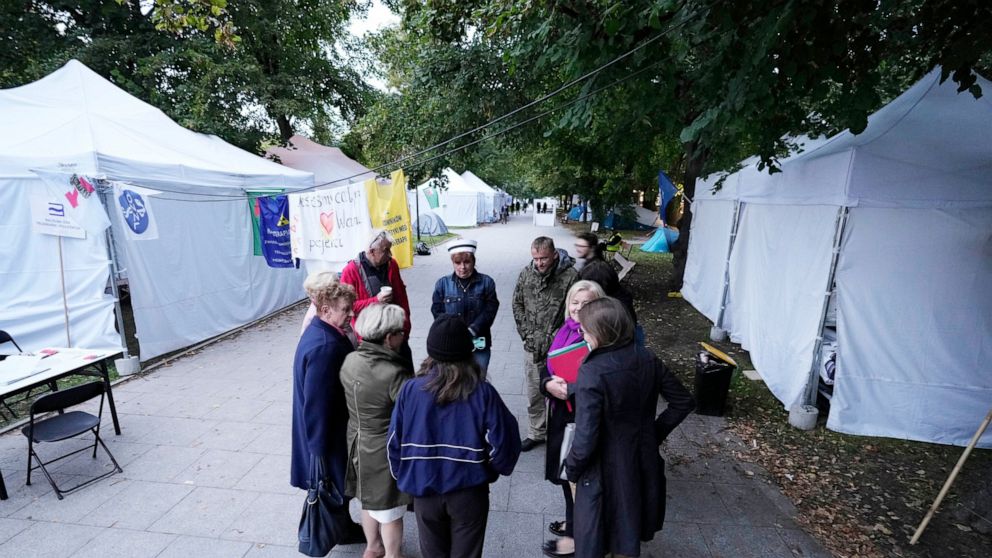 WARSAW, Poland – When a priest arrives at a hospital in Chorzow to perform the last rites, nurse Mariusz Strug can see fear in the eyes of dying patients. â€œAfter the sacrament, they knew what was going on,â€ he said.

But there were no psychologists available to offer any solace to the patients. Strug and another nurse would try to offer kind words, but they were stretched to the limit to treat 60 patients in their COVID-19 ward.

â€œPeople come to us and they want us nurses to perform a miracle,â€ Strug said.

Exhausted from working in such an understaffed system, he is part of a group of healthcare workers who have come to Warsaw from all over Poland for a 24-hour protest outside the Prime Minister’s office that has been going on for nearly two weeks.

After a year and a half of the pandemic, and as Poland stands on the cusp of a fourth wave of COVID-19 infections, nurses, doctors, ambulance drivers and other health workers are came to urge Prime Minister Mateusz Morawiecki and other authorities to make far-reaching reforms of the health system, arguing that it risks collapsing.

“The pandemic has shown us how bad the health system is,” said Gilbert Kolbe, nurse and spokesperson for the protest movement. â€œThis is the last chance to do something before it’s too late. We will not be able to avoid a crisis in five, ten years.

While healthcare workers in the European Union in 27 countries have been tested by the pandemic, Poland has faced this test with fewer doctors and nurses than most. According to OECD statistics, Poland has the lowest number of practicing doctors in relation to its population: only 2.4 to 1,000 inhabitants compared to 4.5 in Germany. Poland also has only 5 nurses per 1,000 inhabitants, which is lower than the EU average of 8 and well below richer countries like Germany, which has 14.

The Polish healthcare sector has been strapped for resources for decades, a situation that has not been rectified by a series of governments on the left, center or now right.

The problems were exacerbated by the thousands of doctors, nurses and others who left Poland for better paid work in Western Europe after the country joined the EU in 2004.

Among the healthcare professionals who remained in Poland, many also left the public sector for higher-paying jobs in the private sector, leaving less to care for the poorest people, said Kolbe, a 25-year-old. who left a public hospital. work for a private medical company but hopes to return to the public system one day.

Kolbe said that an average of 5,500 people complete their nursing education each year in Poland, but only around 2,500 go to work in the public system.

Some of those who protest say they are simply exhausted. With low wages, some work more than one medical job to support themselves.

Alicja Krakowiecka, a 56-year-old nurse from the southern city of Czestochowa, said her hospital was so understaffed that at the height of the pandemic she sometimes started her day at 6 a.m. only to be invited to stay because that the night nurse was ill. She was then left alone with 30 patients for a 24 hour shift. Instead of taking two days off, he would be asked to come back the next evening.

” You refuse ? She asked, explaining that she was okay with the exhausting changes out of a sense of obligation.

The protest began on September 11, when tens of thousands of people from all over Poland marched through Warsaw. Some stayed in tents and held daily press conferences and lectures.

Protesters were deeply moved last weekend when a 94-year-old man who came to give them candy killed himself a few feet away. A gunshot rang out at a press conference and medics ran towards the man, but could not help him.

Since then, they have protested silently, waiving press conferences.

Amid the pressure of protests and talks between health unions and the government that last for weeks, Morawiecki announced on Tuesday that an additional billion zlotys ($ 254 million) would be allocated this year for wages and salaries. education in the health sector.

In addition, Health Minister Adam Niedzielski said on Wednesday that he had agreed to pay paramedics more.

Still, the group that organized the protests said the rest of the healthcare community was not happy, meaning more talks between the government and the protesters are on the way.

Kamila Maslowska, a medical student, stopped in protest tents with friends on Tuesday to show her solidarity.

â€œI am fluent in two more languages â€‹â€‹besides Polish so I think I could find a job abroad,â€ she said, â€œ(But) I wouldn’t like to leave. thing is changing for the better.

Follow all of AP’s stories about the coronavirus pandemic at https://apnews.com/hub/coronavirus-pandemic.