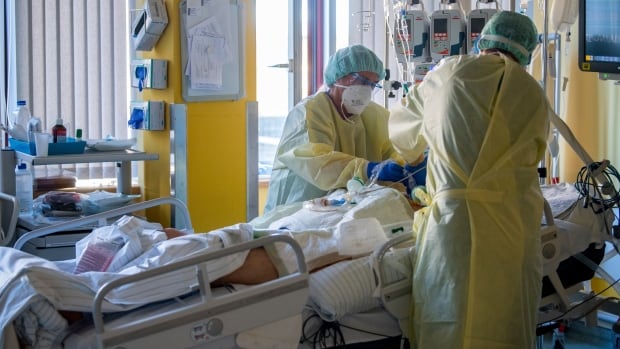 Unions and health regulators in Saskatchewan say they know little about the government’s ideas to bring in international workers to deal with staffing shortages caused by the Omicron variant.

During a provincial COVID-19 update on Jan. 12, Premier Scott Moe said the government has inquired about the number of international healthcare providers currently in Saskatchewan and how many who applied in the province.

“And is there an opportunity for us in this province to allow these people, who have applied to work as nurses, as [licensed practical nurse], like a [continuing care assistant], to bring them to our health facilities? said Moe.

“Because we will need them in the coming weeks as their applications are being processed by their respective governing bodies.”

In an email to CBC News on Monday, the Department of Health said it was working with the provincial health authority and public safety agency to ensure “appropriate staffing levels” during the Omicron wave.

It lists initiatives to strengthen staffing, including “working with deans, colleges, employers and regulators to encourage recruitment and provide information on available training and employment opportunities in care.” healthcare, including how to apply for nursing and other hard-to-recruit positions”.

The ministry said efforts are also underway to “explore opportunities” for foreign health providers to work in “non-regulated positions pending licensing in a regulated health profession.”

“Consultations with unions, regulators and other stakeholders will continue over the coming weeks,” the email said, without indicating which groups are currently involved in the discussions.

No discussions yet: unions, regulators

The College of Registered Nurses of Saskatchewan confirmed Friday that the government has inquired about the number of internationally trained nurses the group works with.

However, “no further discussions have taken place at this time”.

The College of Physicians and Surgeons of Saskatchewan said it had “no recent contact or discussion with” the provincial government about “the potential licensing of foreign-trained physicians.”

Saskatchewan Polytechnic offers a bridging program for internationally educated nurses, which provides credit for prior experience to facilitate their transition into the provincial workforce.

I dare say we waited way too long to do that. We waited until we were exhausted, almost dry. And people are suffering a lot,– Tracy Zambory, President of the Saskatchewan Nurses Union

The school’s president and CEO, Dr. Larry Rosia, told CBC News on Monday that there have been no discussions with the provincial government about international recruitment.

Barbara Cape, president of Service Employees International Union-West, said the union had not been consulted, adding that SEIU-West had sought clarification from the Department of Health, “but no one has an answer.”

“They don’t look locally, then act globally,” Cape said. “There is currently no partnership with First Nations and Métis communities around improving education, creating opportunities here at home.

Cape’s view is shared by the head of the Saskatchewan Nurses Union. Tracy Zambory told CBC News that international workers are a great resource, but cannot be the only focus.

“Recruiting nurses is only part of what needs to be a comprehensive and actionable health human resources strategy,” Zambory said.

“We have to ensure that we retain what we have, our registered nurses who are here. We need to make sure that we have conversations with the indigenous community.

Zambory said SUN has also not been consulted by the provincial government, despite the union’s willingness to be at the table.

She added that the challenges are going to be “extreme” when it comes to properly supporting international healthcare workers in an already short-staffed and exhausted working environment.

“I dare say we’ve waited far too long to do this. We’ve waited until we’re exhausted, almost dry. And people are suffering tremendously,” she said.

“It’s going to be really difficult to bring in new people, to find mentors who aren’t themselves overworked, or a facility, unit and agency that isn’t.”