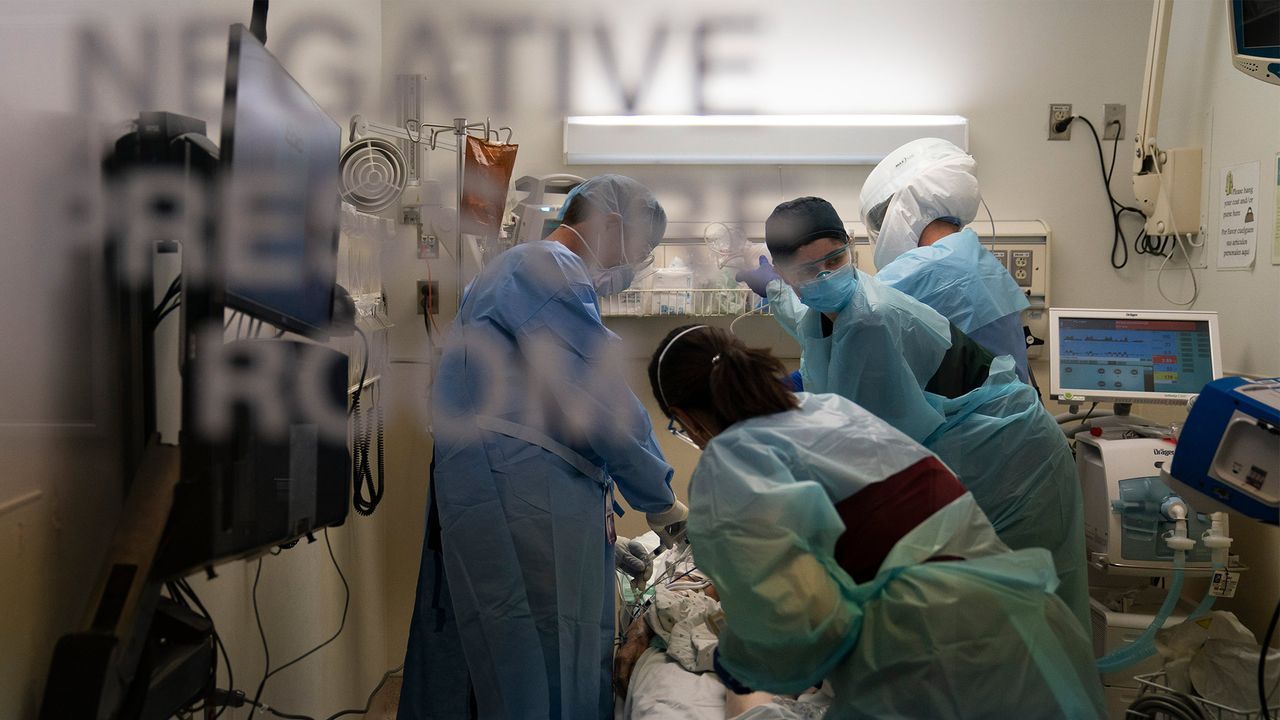 Following the reopening of schools in the United States in August and September, the latest wave of COVID-19 saw a wave of protests and strikes by healthcare workers against the horrific consequences of the pandemic’s handling of the epidemic. ruling class. Workers are ordered to return to work and all safety concerns have been put aside to secure profits. According to official figures – which are undoubtedly a vast underestimate – nearly 700,000 people have died from the disease in the United States alone. The normalization of deaths, seen by healthcare workers at unprecedented levels, has sparked massive discontent among these workers.

No serious mitigation measures have been taken, let alone any effort to eliminate the pandemic. Hospitals and emergency rooms, which were already largely understaffed before the pandemic, have filled up to the point of being forced to turn away patients. Many no longer have beds and patients are forced to sleep in the hallways. Hospital staff are forced to use triage – to decide who gets care and who doesn’t, who lives and who might die – based on the limited resources they have. These morbid choices are among the main grievances raised by healthcare workers. The requirement for safe staffing ratios is essentially the requirement that the health system fulfill its official mission: to take care of the sick.

The Service Employees International Union (SEIU) chairs the staff of Sutter Delta Medical Center in Antioch, California, where healthcare workers voted to start a strike in October for safe staffing ratios. Sutter Delta spokesperson Marissa Currie responded to the strike announcement condescendingly, saying management and the union will continue to try to come to an agreement “to avoid a costly strike and stay focused on our commitment. common ground in patient care at a time when our communities need us most.

Jennifer Stone, an emergency technician at Sutter, said Beckers Hospital Examination, â€œWe wear too many hats, we describe angry COVID patients, then we rush to a code, then we talk to family members who have just lost a loved one. We cannot provide adequate care. We are neglected and left to fend for ourselves, and we can no longer do everything.

This wasn’t the first eruption of anger among California healthcare workers over staffing ratios. In July, 1,400 nurses at USC Keck and USC Norris Cancer Hospital in Los Angeles held a two-day strike against dangerous staffing ratios.

SEIU has a long history of strangling the struggles of healthcare workers. In June alone, the SEIU called off three separate strikes by Connecticut nursing home workers. All of these strikes were motivated by the demand for secure staffing ratios.

The call for staff safety was also made at Mercy Hospital in Southern buffalo, new York, where workers were forced to work during lunch hours and breaks to make up for understaffing. On top of that, medical supplies are running out, a problem commonly reported by healthcare workers throughout the pandemic. New York has 2,410,000 recorded COVID-19 cases, with some 55,000 deaths and a 7-day average of 2,224 hospitalizations. Last year, at least 2,334 adults who died from COVID-19 were reportedly placed in a mass grave on Hart Island, and many bodies of deceased victims were stored in refrigerated trucks for long periods of time.

Oregon is now asking refrigerated trucks to store the multitude of bodies that have piled up due to “herd immunity” policies, which have allowed infections and deaths to spread freely. Hospitals in Oregon average 1,000 hospitalizations per day, with only 8% of beds available. A survey at Kaiser Permanente Hospital in the state showed that 42% of its resident nurses are considering leaving the profession due to the high burnout rate due to the pandemic. Nurses are trying to strike a new contractual deal as the current one expires on Thursday. Kaiser is only offering a meager 1% increase for all nurses and a 1% flat rate increase for each subsequent year of the contract.

Earlier this month, Alabama Resident Ray Martin DeMonia died of a cardiac event. He did not have COVID-19, but was turned away from 43 separate hospitals in three southern states seeking help for his condition. He died some 200 miles from his home in neighboring Mississippi, seeking a hospital capable of treating him.

Nurses at the University of Alabama Birmingham (UAB) hospital staged a one-day strike on September 6, saying they were “understaffed, overworked and underpaid” . About twenty employees of the emergency department showed up for their shift two hours late as a sign of solidarity. Dr Lindsey Harris, speaking on behalf of the Alabama Nursing Association, appealed to the university, saying that “if these issues are not addressed UAB and state hospitals risk losing their nurses for the benefit of jobs in other states “.

In Massachusetts, where there have been more than 800,000 recorded cases and 18,500 confirmed deaths, the longest nursing strike in state history continues at Saint Vincent Hospital at Tenet Healthcare in Worcester. Again, the primary demand of nurses is to have safe staffing ratios. While the Massachusetts Nurses Association (MNA) has negotiated for more than six months, behind closed doors, to reach a deal, nurses have yet to receive strike pay. Tenet called in 164 scabs in an attempt to replace the attackers for good. The MNA’s strategy has been to conduct protracted negotiations as the workers it nominally represents slowly starve on the picket lines.

Speaker of the House of Democrats Nancy Pelosi and U.S. Representative Jim McGovern met with the National MP earlier this month, the day after the sixth anniversary of the strike, to align with the union bureaucracy and position themselves as advocates for nurses. This follows several visits by Massachusetts Senator Elizabeth Warren where she told nurses she would support them until Tenet makes a deal. These are representatives of the same party that called the National Guard for a nurses’ strike in Connecticut earlier this year and is now threatening to do the same in New York.

Healthcare workers are not only fighting COVID-19 and the private healthcare system, but also unions, who each time sabotage their struggles and work to prevent them from bonding with their siblings through the country. To advance their struggle, healthcare workers must break away from pro-corporate unions and form grassroots committees, unite internationally with workers from all industries to eradicate COVID-19 and end to the for-profit health system.