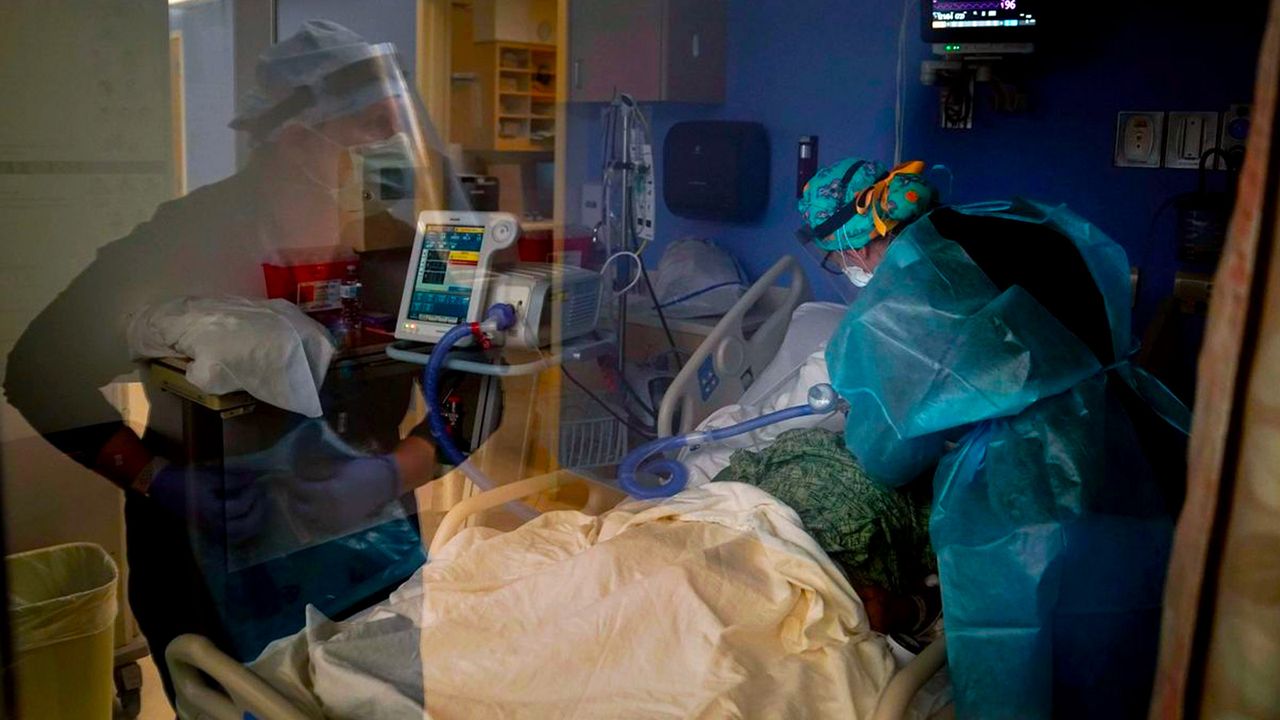 The unprecedented explosion of COVID-19 cases across the country this winter continues to strain all sectors of workers, including frontline healthcare workers. Overwhelmed by the cumulative toll of all previous outbreaks, exhausted healthcare workers talk about the conditions they face with the spread of the Omicron variant.

The total number of confirmed COVID-19 cases in the United States reached more than 75 million this week, with more than 18.6 million new infections reported in the past 28 days. According to Johns Hopkins University’s tally on Tuesday afternoon, the national death toll exceeded 888,000, while the Worldometer tracker shows deaths topped 920,000.

The number of patients currently hospitalized with COVID-19 is just over 133,000, down from an all-time high of 159,400 on January 20, according to a seven-day average recorded by the Department of Health and Human Services. Social (HHS)

That’s important, especially given a November Centers for Disease Control and Prevention (CDC) Morbidity and Mortality Weekly Report who used data from the delta surge to reveal that using intensive care beds at 75% capacity nationwide is associated with around 12,000 additional additional deaths two weeks later (with deaths four and six weeks later). Additionally, hospitals with 100% critical care bed capacity were associated with an additional 80,000 deaths over the following two weeks.

Although intensive care unit capacity is not a direct cause of excess deaths, it is an important indicator of overburdened hospitals. When intensive care beds are full, it affects every aspect of the hospital system, leading to ambulance diversion, supply limitations, staffing shortages, delays in care and overcrowding. For example, a lack of open critical care beds means that an entire hospital’s admissions process can slow down so much that emergency departments experience day-long waits.

Workers at Chicago’s Advocate Trinity Hospital recently described conditions in their emergency department (ED) to reporters at the Atlantic. The hospital’s emergency medical director, Michael Anderson, explained: ‘We had patients waiting with bacterial infections, surgical issues and so on. people who were sick to such a degree that we would never keep them waiting under normal conditions. He added that the hospital had never been so overwhelmed with COVID-19 patients at any other time during the pandemic.

In order to meet the needs of critically ill patients, the hospital’s emergency department has been forced to turn rooms into makeshift intensive care beds, further stretching the department’s staff and other resources. During one shift, Berenice Zavala, an emergency room nurse, told the Atlantic that they had a COVID patient go into cardiac arrest in the waiting room. She described how only four nurses were on duty that day, three of whom were traveling nurses on their first day on the job. Unable to properly resuscitate the patient, the patient died. Berenice said: “It really touched all of us. People blamed themselves. I have never worked under these conditions.

Studies have shown that high intensive care unit occupancy, ambulance diversions, and emergency room overcrowding all lead to worse outcomes such as medical errors, treatment delays, and increased mortality. ICU capacity is also affected by nursing shortages, as capacity is a measure of available staffed beds. It is common for hospitals to block beds across the hospital for staffing purposes.

An intensive care nurse at the Cleveland Clinic in Ohio spoke anonymously to WSWS reporters. She has worked in a COVID intensive care unit since the start of the pandemic. “Right now we have three or four completely full intensive care units. It’s really bad. The nurses leave, just pouring out. Everyone is super burned. We are completely short-staffed. They bring [travel nurses] and close the beds.

She added: ‘And now they’re also bringing nurses back five days after a positive test, so it’s like we have a ton of sick nurses on the floor too! It’s becoming increasingly clear that they don’t care about us.

A Northern California nurse told the WSWS how overcrowding is affecting patients and workers in all areas of the hospital. “I don’t work on COVID soil but you can still feel the surge everywhere. On the one hand, we have sick nurses. One of my colleagues is in intensive care. The other aspect is that we are forced to keep really sick patients longer than we should because intensive care beds are hard to come by.

She continued: “On my last shift I had a patient, an elderly man, who was collapsing, needed more and more oxygen because he had probably aspirated. I called the crisis team and an ICU doctor came and approved my patient for ICU. But when I called them for a report, they said they weren’t ready. They had to move another patient out first to make room for mine, then clean the room. This meant that I suddenly had to become an intensive care nurse for my patient, which I am not trained to do, neglecting all my other patients. It was only a 20-30 minute delay, but it could have been the difference between life and death for this man.

Many hospitals, like the ChristianCare Health System in Wilmington, Delaware, are still operating at 99% capacity despite patient numbers dropping 33% in recent weeks.

As Dr. Ken Silverstein, chief medical officer of ChristianCare, which has three hospitals and more than 1,200 beds, said. CNBC, “There is nothing benign about what is happening in our hospitals and in our intensive care units, especially if you are unvaccinated or unboosted.” For the first time in the hospital’s 130-year history, the ChristianCare Health System was forced to implement “crisis care standards.”

The so-called “crisis care standards” refer to an extreme set of measures that allow hospitals to ration staff and resources. These standards are essentially legal protection for hospitals to deal with overflow situations, including the suspension of surgeries and preventive care. Before the pandemic, their implementation was rare, now they are increasingly common.

In hard-hit states like Texas, there are currently only 259 staffed intensive care beds left, 11 fewer than the previous record set by the Delta variant, according to the Texas Department of State Health Services. With more than 13,330 Texans hospitalized with the virus, the state is nearing numbers not seen since the last surges in early 2021 and fall and summer 2020.

Bryan Alsip, chief medical officer at University Health in San Antonio, told the Texas Grandstand, “Due to the high level of transmission and infectivity of the Omicron variant, a large number of our employees are testing positive,” adding “We have been doing this for a long time now, almost two years. We are now experiencing our fourth major wave of these patients. It can get tiring.

It’s not just hospital workers who are affected by Omicron’s surge. Louise, a pharmacy cashier in California’s Central Valley, whose name has been changed to protect her identity, spoke to WSWS reporters about conditions at her Walgreens pharmacy. Pharmacy workers across the United States staged a nationwide strike in December to protest chronic understaffing, low wages and working conditions that put employee and patient safety at risk.

“We only have one technician right now,” Louise said. “We still have pharmacists because they float from store to store. Workers come on their day off because there is work piling up and they can’t get there.

Illustrating the added burden of providing vaccinations when staff are already short-staffed, Louise continued: “The injections we have to constantly administer are overwhelming. You can’t always hit. We used to be a 24 hour store, but now we sometimes have to close at 5 or 9 p.m. because of the staff. Many workers have already started looking for other jobs and are considering early retirement. As soon as you walk through the door and see this whole line of people, you feel drained. People are exhausted, people are tired. Technicians quit. We had three resignations on the same day in a store.

At the same time, the Biden administration continues to downplay the danger of COVID-19, in an effort to disarm any public resistance against the escalating campaign to lift all remaining restrictions and declare the deadly virus “endemic.” , a lie refuted by scientists.

Consistent with that strategy, new HHS guidance has “retired” its requirement that hospitals report COVID-19 deaths to it daily. The new policy was released on January 6 and went into effect on February 2. Many states across the country are also halting their contract-finding efforts.

New CDC guidelines in December halved the recommended isolation period for people infected with COVID-19, from 10 days to 5 days or even less for healthcare facilities experiencing severe staff shortages – a description which applies to virtually all hospitals, clinics and nursing homes. . In line with these national guidelines, the California Department of Health issued emergency guidelines last month that allow COVID-19 positive healthcare workers to return to work without any quarantine.